In 1827 Scotland was divided into three Vicariates, the Eastern District, the Northern District, and the Western District. The Western District, centred on Glasgow, included the counties of Argyll, Ayr, Bute, Dumbarton, Inverness (southern part), Lanark, Wigtown, and the Western Isles. Although George Smith came from the Buckie area (part of the Northern District) he was, in fact, a priest of the Western District. These Vicariates ended with the setting up of most of the present Dioceses in 1878. When that administrative change took place, the priests did not have a choice about the Diocese which they wanted to belong to. They just stayed where they were. That explains how a priest from Buckie could end up in the Diocese of Argyll and the Isles and how many Highland and Island priests ended up serving in the new Glasgow Archdiocese.

As parish priest of Rothesay, one of his parishioners, at least during the summer, was the Marquess of Bute. Born in 1847 he succeeded to the title at six months of age. He lost his mother when he was twelve. He caused a huge scandal in Victorian Britain by becoming a Catholic in 1868. He was fabulously wealthy and, amongst other things, was a great benefactor to the Diocese. He provided the Tin Cathedral in Oban and was the founder of the Bute Hospital in Daliburgh after being approached by Fr John MacKintosh of Bornish and Fr Allan MacDonald of Daliburgh.

Some have suggested that he was appointed Bishop through the influence of the Marquess of Bute . Bute would have had his own ‘place man’ whom he could steer in whatever direction he wanted. I don’t know if that was the case or not but he turned out to be a poor administrator although he was undoubtedly a sincere and holy man.

His predecessor, by now Archbishop Angus MacDonald of St Andrew’s and Edinburgh, died in April 1900 followed by the Marquess himself in November of the same year and, really, from that year onwards Bishop Smith struggled. He was a ‘stranger in a foreign land’, non-Gaelic speaking but also with no cultural connection to the Highlands and Islands and someone who appeared to make little or no effort to ‘bridge the gap’.

Things went seriously adrift when he became a victim of senile dementia. The Canons of the Diocese petitioned Rome to have him retired due to ill health and to have a new Bishop appointed. Rome announced the appointment on 13th November 1917 of a co-adjutor bishop (a helper bishop with right of succession), Fr Hugh Cameron, and nominated him as the titular BIshop of Usula. A week later, on 20th November, Cameron in a private audience with Pope Benedict XV declined the appointment on the official grounds that he had never been consulted before being nominated. Some have said that he told the Pope that there was madness in his family to which the reply can be given – ‘which family doesn’t have madness in it?’

The best fitting story that I have come across to explain Cameron’s refusal is that he was a serving military chaplain with the Lovat Scouts at the time – I think in Salonika – and he saw that his first duty was to the soldiers in his care. In any case, he felt that he could not/would not be released from military service. In fact, he wasn’t released from military service until 29th March 1919, quite a long time after the war had finished.

Poor Bishop Smith sent to his eternal reward on 18th January 1918 and is buried at Pennyfuir cemetery in Oban. A new Bishop, Bishop Donald Martin, was ordained on 11th June 1919 and amongst the first things he did was to appoint Fr Hugh Cameron, Vicar General, a post which he held for seven years. 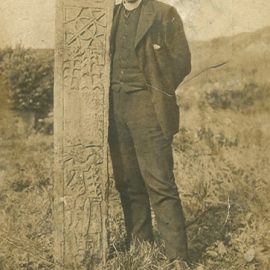