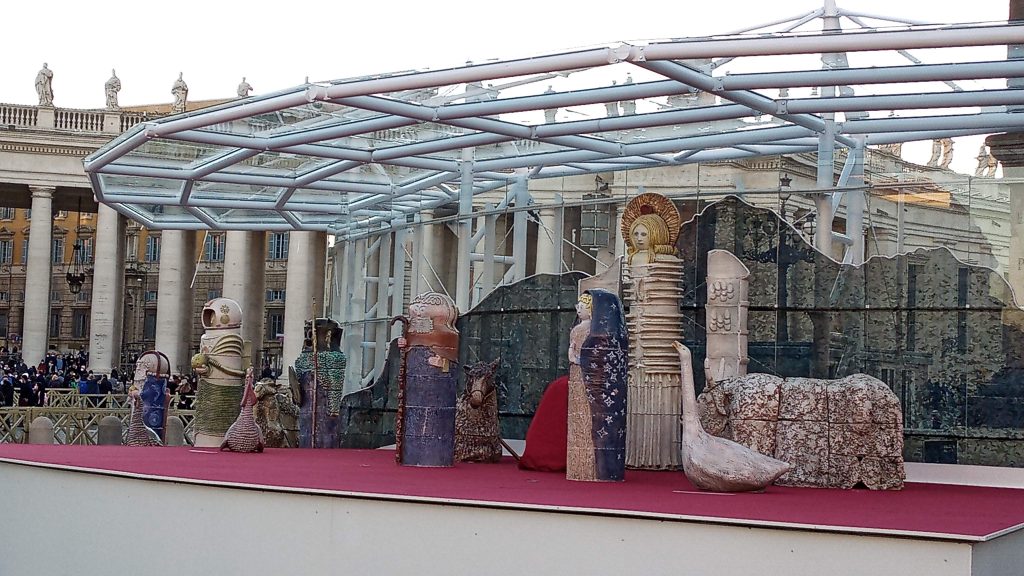 Nativity scene in St. Peter’s Square, according to Bishop AVVENIRE the crib, titled “Monumental Nativity,” was designed between 1965–1975 by students and teachers from the FA Grue Art School. The art that inspired the 54 crib characters originates from Castelli village in the Gabriele d’Annunzio region of Italy, “which since the 16th century has been a center for the production of ceramics appreciated all over the world.”

Pope Francis in his apostolic letter explains the meaning and important of Nativity Scene.  The enchanting image of the Christmas crèche, so dear to the Christian people, never ceases to arouse amazement and wonder. The depiction of Jesus’ birth is itself a simple and joyful proclamation of the mystery of the Incarnation of the Son of God. The nativity scene is like a living Gospel rising up from the pages of sacred Scripture. As we contemplate the Christmas story, we are invited to set out on a spiritual journey, drawn by the humility of the God who became man in order to encounter every man and woman. We come to realize that so great is his love for us that he became one of us, so that we, in turn, might become one with him. Please Download the full Apostolic Letter Admirabile Signum

The Death of Bishop Brian’s Mother

Ash Wednesday liturgy and Stations of the Cross

Pilgrimage to Celebrate the 250th Anniversary of the Moidart Mission